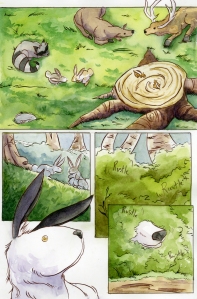 Hullo again. I’ve been intending to post these while they were in progress, but my laziness (and finals) had gotten the better of me, so here are the completed works from my children’s book class. I wrote the story, and while many others wrote their own, I ended up being the only one doing a comic, so it was a little awkward, since I think I was also the first in the class to ever do so. Therefore, there were a lot of conflicting things about the deadline, considering it takes a lot of time to make a comic page. It’s hard enough making a regular illustration, but you have to compose panels, arrange the panels for page composition and clarity, etc., etc. If anything, it was at least enjoyable to make a watercolor comic, since I’ve always wanted to, as well as being able to draw squishy, marshmallowy animals. Not to mention the story is about THE POWER OF FRIENDSHIP.

These pages aren’t in sequence, so don’t try to read too much into it. We’re assembling the final book dummies and a complete submissions packet, so who knows, maybe one day, with enough polish, I’ll send these in.